As a part of the planning for the proposed new Hamilton to Papakura commuter train that was approved by Waikato Regional Council last year, and due to commence running in March 2020, new carriage design concepts were developed by Auckland-based Barnacle Design Ltd.  These have consequently been chosen by stakeholders in the proposal, and have been taken forward to the construction stage by KiwiRail. 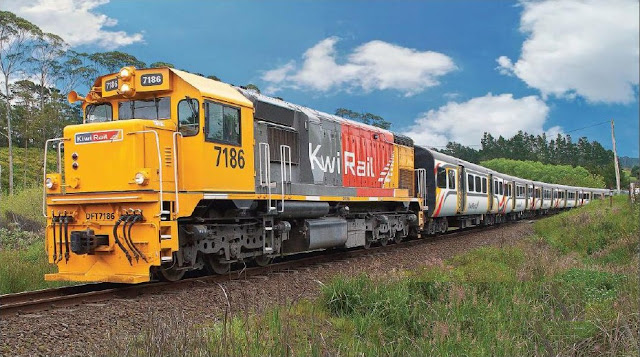 Four basic concepts were designed, then considered by stakeholders, all based on former SA and SD class carriages made redundant in 2015 by Auckland Transport.  These included:
Other combinations were also designed early on, including a refurbished SD carriage with severy that focussed on wheelchair accessibility, but reduced the number of regular seats to just three.  But it was the four above mentioned designs that went through to final consideration, and of these, the second, third and fourth designs listed above were recommended.  The 54 seat version was not taken further as it was recognised that international best practice is to provide one toilet for approximately every 50 passengers.

These three carriage designs have subsequently been classified by KiwiRail as classes SR (seating), SRC (seating plus severy) and SRV (seating, genset and driving cab).

The R in the new SRx classification series stands for Regional, and marks the beginning of a new variety of carriage, designed for longer distance service, but retaining the metro-style doors.  This results in slightly fewer seats being available as opposed to traditional quarter doors as used on existing regional carriages from Wellington to Masterton and Palmerston North.  But the cost and complexity of conversion was considered prohibitive, and the metro-style doors presently fitted are relatively modern and fully functional as is.  They also make it easier to board with bicycles and make more of the train accessible to wheelchair users.

One disappointment for me is the lack of ribbon windows as fitted to the SW series used between Wellington and Masterton.  Those panoramic windows really enhance the travelling experience, and create a very sleak looking carriage profile.  But I gather that may have been difficult to acheive with retention of the metro-style doors, which interupt the monocoque chassis design of the former British MkII carriages.  You can only modify such a structure so far before it weakens, without substantional further modifications. And that costs.

And an example of a typical cross-section of an SR class carriage: 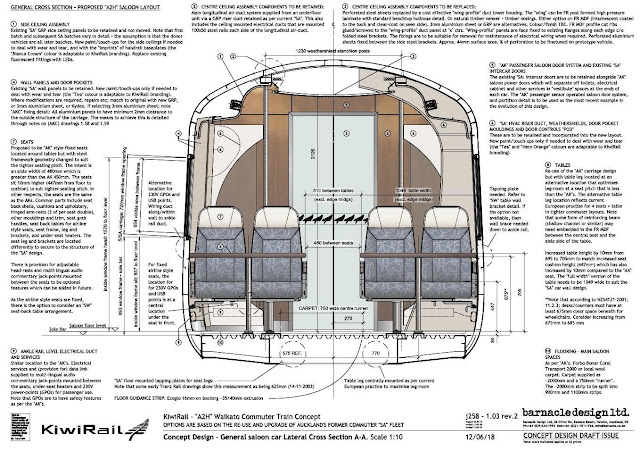 In normal service there will be two consists of 2 x SR, 1 x SRC and 1 x SRV.  The other three refurbished carriages will be one spare of each class.

A new servicing depot will be constructed at Te Rapa, and all refurbished carriages will be serviced there.  All the carriages to be refurbished are now at Hutt Workshops, having been moved from storage in Taumarunui in 2018 and early 2019.  Work began on their refurbishment in February 2019.


The trains will serve four stations in total, being Frankton and Rotokauri in Hamilton at the south end of the journey, Huntly along the way, and Papakura at the north end of the journey.  This is somewhat disappointing when you consider the substantial population growth taking place in Te Kauwhata, Pokeno and Tuakau, but also Ngaruawahia and Pukekohe (for alighting northbound and boarding southbound) have potential.

Starting from the south, the first station is Hamilton (Frankton) station, and minimal work is required here as the existing station building and shelter are to be used.

At Rotokauri, a whole new station needs to be built, and this will be in the form of a central platform between the two mainlines, one of which will be slewed west to create the space necessary.  Pedestrian access will be via a level crossing with cages, although this may yet be changed to an overbridge design, if not from day 1 then at a later date as usage increases.  Such overbridges are far from cheap, as they need to be wheelchair accessible and this may in turn necessitate the need for elevators.  It may be a good idea to leave that consideration until such time as the service is considered permanent, and not a trial.  An overbridge would however be an opportunity to also provide a direct pedestrian link with the shopping mall on the eastern side of the tracks, which isn't currently planned to be linked.


At Huntly, the existing station which hasn't been used since the Overlander last ran is to be reopened after an upgrade that involves a new or heavily reconstructed platform, new shelter, basic chip seal park'n ride, upgraded siding and signals, and resurfaced pedestrian overbridge linking the station to the town centre over the railway lines and state highway 1.


The Huntly station is unusually located on a siding rather than on either of the mainlines.  It was previously a central platform between the mainlines slightly further south of its present location, but that was demolished and the tracks straightened in the late 1990s.  The new, very basic station, was then provided on the siding, and was last used by the Overlander.  This slows trains down a bit, as they need to pass through the turnouts at each end of the siding, and travel at yard speed within the siding. For northbound trains, they need to crossover the southbound track to access the siding.  It's not ideal, but I do note that the original central platform design further south could potentially be reinstated one day if usage justifies it. The straightening or widening of state highway 1 here never eventuated, and is unlikely to ever do so now that the Huntly bypass is nearing completion.

Papakura station does not require any work for the service.

Other stations were considered for the service, but ruled out, though I understand consideration is being given to extending the scope of the proposed Pukekohe electrification to include Tuakau or Pokeno.  Both locations are undergoing substantial growth but their usage has been deemed more suited to frequent services, which has oddly increased their chance of being added to the metro network but worked against them being included in the Hamilton train project.


The Hamilton-Papakura service is to operate as two morning trains from Hamilton to Westfield on weekday mornings (no passengers north of Papakura), two from Westfield to Hamilton on weekday evenings, one from Hamilton to Westfield on Saturday mornings, and one from Westfield to Hamilton on Saturday afternoons.  A Sunday service is expected to commence in year four (assuming a successful three year trial), but has been held off for now to allow for Sunday track shutdowns associated with the proposed third main project.  The indicative weekday timetable:


Three DFB locomotives overhauled for the proposed trains, which I understand to be 7077, 7295 and 7335, have been allocated to the service.  The cost of these three overhauls, amounting to $8m, has been fully allocated to the establishment budget of the service.  They will be used in freight and long distance passenger service until the Hamilton train commences.  The normal plan will be to have two in service and the third held as a spare, on any given day.

The SD-to-SRV carriage conversion includes retention of the driving cab controls, and through-train locomotive control system, so it will be possible to drive the trains from either end.  If not on the long distance run, then for the positioning moves at each end of the journey.
Posted by Geoff at 4:16 AM

Geoff
Sleep all day, work all evening, play all night